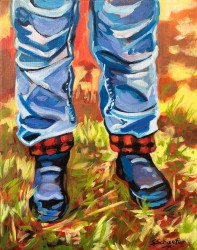 Spring Memories on the Farm

Spring on the farm always brought a new sense of joy. The long cold and windy days of winter were quickly disappearing into just a memory.

The snow was melting, the birds were chirping and as a little kid, that meant lots and lots of mud. You could jump in it, and play in it letting your inner potter loose. We could re-direct the melting streams of water with sticks. In general it was a time to have fun and ultimately a time to be muddy.

This is a spring memory that clearly sticks in my mind. It was a bright and warm sunny spring day on the farm when we were playing outside. One of my older brothers was making his way out to a summer fallow field. My sister and I decided that we would follow and join on his adventure, wherever it would take him, because that’s what sisters did. I remember him turning around and sternly telling us “Stop following me, you stupid girls.” But we did not heed his advise, and me being the youngest, I would follow my sister and brother blindly without questions.

After walking a few steps into the field our feet and legs became heavy as our rubber boots were clogging up with thick sticky mud. My brother was only a few feet ahead of us, but his stride was slowing too. Each step became hard- er and harder as the mud was acting like glue. At some point we could not move any further. What to do? My bottom lip began to quiver and my eyes got watery forming big round tears. As little kid, I gave up and just sat down in the mud, That was it. This is how my young life would end. Out in the field, stuck in the mud.

As always, my mother’s eye was never far from us kids. Looking out the kitchen window she was able to access the situation and send my older brother out to the field to rescue us. One at a time, he pulled us out of the mud, and right out of our boots, and hauled us back to the house.

I recently asked my mother if she remembers that particular incident, and she said that we were always getting stuck in the mud and loosing our rubber boots. She said that there was a lineup of rubber boots from small to big in the garage, as that was our favourite foot apparel. Wouldn’t that make an amusing painting?

There was never any punishment that I recall. It was just another day on the farm. All I know is that on that warm spring day, we lost three pair of perfectly good rubber boots.

My sister’s memory on that fine spring day is slightly different from mine, as we question which brother led us to our muddy fate.

I still love wearing rubber boots in the spring and that childhood memory always brings a smile to my face.

Please consider supporting us with your donation.

I saw the first edition Island Arts Magazine about the time I felt I should be starting to promote my work. I was impressed and have placed an ad in each edition since. I have received many...

More Testimonials »
Back to Top