Carole Finn has had a lifetime of leadership in Haliburton Ontario to establish a school - the Haliburton School of Art and Design, a public art gallery - Rails End Gallery and a handful of art groups of differing disciplines.

After receiving the Queens Medal and many other awards for her work, Finn finally followed her hearts desire - to be a full-time professional artist in 2009. During those years of public service Carole’s education as an artist continued, firstly. at OCAD and York University Fine Arts in Toronto and of course, at her beloved community College, Haliburton, HSAD. It was at this school that she enjoyed courses over the years with many of the countries top artists

You have many accolades to your art career. Which one are you particularly proud of?

At Convocation in 2003 I received a Fellowship in Applied Education from Sir Sandford Flem- ing College, Ontario which is the highest award bestowed by the Community College System. This was certainly a great honour.

The greatest thrill, however, was to see the ac- tual Haliburton School of Art and Design spec - tacular structure sprawling out its wings into the forest that surrounded it and welcoming its stu- dents to come in through its big red doors. We called it Hogwarths because of its leaning walls.

What began as a dream of a 3 or 4 people my- self among them in 1965 became a reality after all those years. All of my achievements during that time until the construction were all part of the process required to get to place where there would finally be a physical Art College. Starting with the forming of the many art groups into a Guild, and making a railway station into an Art Gallery. Then a few years later the chairing its expansion, sitting on a Board of Governors for many years, heading the fundraising committee for the building, were all part of what it took to keep a public focus on the final goal. That was my life.

I didn’t become a professional artist until 2012 when life settled enough that I could do really what I intended to do in 1965.

What inspired your move to the West Coast?

My family were skiers so we came west often and yearly. My son finally settled in Vancouver and then Ucluelet. Being in Nature has always made up the essence of who I am. I lived on a lake around water and in the woods always. I am always drawn to water.

You have quite a strong connection to Ucluelet. Please explain.

My husband and I first came to the Pacific Rim to stay at Wickaninnish Inn when it first opened after some spring skiing. I think 1998. Eoin Finn, our son met us. The beauty of that “stay” at the Inn started the connection for all of us.

In 2010 Eoin bought his home on the “Ridge” in Ucluelet that overlooks Big Beach. The whales swan by and the seals perched on the rocks just below the window. Bears and deer and even the odd misplaced wolf wandered through the spaces surrounding the units. I did my first paintings about the Wild Pacific Trail in Ucluelet to help raise awareness for the need to keep a coastline open for public access.

I still feel a spiritual connection with the trail that follows the shoreline and the miles of beaches that can be travelled almost from Ucluelet to Tofino. I hope these wild and natural spaces will always be part of our Canadian heritage.

What is your favourite subject matter to paint?

When I go to an area that I want to paint I spend a lot of time looking and taking pictures trying to explore what makes that area identifiable and special. Sometimes I come back 2 or 3 times. In the end I will do a series of paintings that I think will accomplish that. It may even be the animals in the ecosystem and not the landscape at all.

My artistic statement hasn’t changed since I started to paint.

“My paintings, which are done in series, are an attempt to show beautiful lo - cations whose natural integrity has either been altered by human intervention or is about to be. What is the cost of our imposition on the virginal status of these lands and the inhabitants therein?”

You are also an instructor, having just completed a painting retreat in Ucluelet. What is it about teaching that inspires you?

Teachers are like artists born to do what comes naturally. As a little girl I used to run a “Summer School” in our Playhouse. Needless to say as a career I combined my 2 talents and became an art teacher. I enjoy breaking learning into understandable step by step segments. All the precepts of art making can be broken into these smaller steps. When they are presented as a whole they are overwhelming but in pieces perfectly understandable. My biggest “kick” is seeing and feeling the pride of accomplishment of ALL the students, beginning or in between, for their finished works and knowing my part was giving them “a leg up” to get there.

Click on an image to display a larger version,
then use slideshow controls at the top of the page. 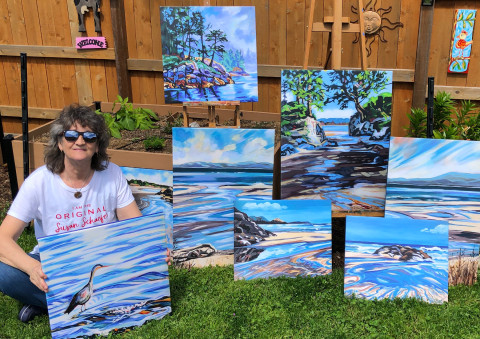 I saw the first edition Island Arts Magazine about the time I felt I should be starting to promote my work. I was impressed and have placed an ad in each edition since. I have received many...

More Testimonials »
Back to Top